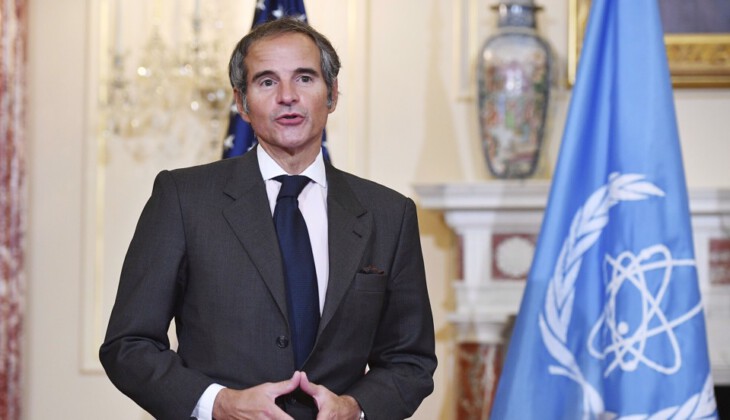 he chief of the UN nuclear agency arrived in Israel on Thursday for talks with senior regime officials, including premier Naftali Bennett, ahead of the agency’s board of governors’ meeting next week.

The high-profile visit, which comes in the backdrop of the latest report by the International Atomic Energy Agency (IAEA) on Iran’s nuclear program, has fueled speculation that Rafael Grossi is in Tel Aviv to hold deliberations on the report with Bennett and his aides.

It also comes amid a stalemate in negotiations between Iran and the world powers in Vienna to salvage the 2015 nuclear deal and to have crippling economic sanctions lifted.

Iran has on many previous occasions cautioned the UN nuclear agency against allowing the Israeli regime to influence its independent mandate and decision-making.

On Thursday, during a phone call with his Singaporean counterpart Vivian Balakrishnan, Iran’s foreign minister Amir-Abdollahian described any political interference in the technical affairs of the IAEA as “unconstructive”.

He said during Grossi’s recent visit to Iran, the two sides had reached a mutually satisfactory agreement through a positive process.

In the report, the IAEA said it still had questions that were “not clarified” regarding the so-called undeclared nuclear material previously found at three sites.

The watchdog further said that it estimated Iran’s stockpile of enriched uranium had grown to more than 18 times the limit stipulated in the 2015 deal with world powers.

The landmark deal, signed in 2015, was left in the lurch after the US unilaterally walked out of it in May 2018 and the Europeans failed to respond to Iran’s repeated calls to salvage the deal.

A year after the US withdrew from the nuclear agreement, Iran started to gradually reverse its commitments under the deal, in line with Resolution 2231.

Iran’s foreign minister, speaking at the World Economic Forum in Davos last month, said Iran was ready for the deal in Vienna but stressed that the US foreign policy has been “taken hostage” by Israel.

Israeli regime officials have scaled up their vigorous campaign against any deal in Vienna, mounting pressure on the Biden administration through the influence-yielding Zionist lobby in Washington.

They have also been flouting conspiracy theories against Iran’s peaceful, energy-oriented nuclear program, to sidetrack attention from ongoing efforts to revive the 2015 accord.

Earlier this week, Bennett accused Iran of stealing classified documents from the IAEA and using them to deceive international inspectors nearly two decades ago.

Khatibzadeh, in a statement late on Wednesday, called the Israeli regime “the world’s #1 JCPOA hater” which he said also “happens to be NPT-denier and the only nuke-possessor” of the region.

“We know this. The world knows this. Time for E3/US to stop pretending to be asleep. They can pursue diplomacy—or pursue the opposite. We’re ready for both,” the spokesman said.

Israel, which possesses the largest number of nuclear warheads in the region, has never allowed IAEA inspectors to inspect its nuclear sites. It has also refused to sign the Non-Proliferation Treaty (NPT).

Over the years, whenever the UN nuclear agency called on Israel to open its nuclear facilities for inspections and adhere to the resolution regarding non-proliferation, it refused to comply.

On the other hand, Iran, despite being a signatory of the NPT, continues to reel under harsh sanctions for pursuing a peaceful nuclear program for energy purposes.

Iran claims its rights under Article IV of the NPT to pursue a peaceful nuclear program, unlike Israel which has not signed the treaty and clandestinely produced nuclear weapons.

The IAEA board of governors is slated to hold a meeting on Monday for which Britain, France, Germany, and the US have reportedly prepared a draft resolution to mount pressure on Iran.

Iran has already vowed a “firm and appropriate” response against any “unconstructive move”.

“We will respond firmly and appropriately to any unconstructive action at the board of governors,” Khatibzadeh said on Wednesday.

Meanwhile, China has warned that any confrontational moves at the upcoming meeting of the IAEA board of governors will only undermine cooperation between Iran and the agency, and disrupt the process to revive the landmark 2015 deal.

The Chinese foreign ministry spokesman made the comments after reports said the Western powers have prepared a draft resolution to push the board to censure Iran at the June 6 meeting.

Zhao Lijian said exerting pressure on Iran and the UN nuclear agency will escalate tensions and complicate the situation.

He called on Washington to make a political decision as soon as possible on the revival of the agreement and urged the White House to actively respond to what he called Iran’s legitimate concerns.

Iran has repeatedly stated that it is waiting for a response from the US on its proposals to revive the deal, but Washington has been dragging its feet on it.

US to gang up with Europeans against Iran

The United States on Thursday confirmed that it would be ganging up with Europeans in backing a resolution urging Iran to cooperate with the UN nuclear watchdog, despite warnings from Tehran.

“We can confirm that we plan to join the UK, France, and Germany in seeking a resolution focused on the need for Iran to fully cooperate with the IAEA,” State Department spokesman Ned Price said ahead of a meeting next week.

He said that the latest report by the IAEA raised “very serious concerns that Iran has failed to credibly respond” to the Vienna-based body’s questions.

“It is essential that Iran does fully comply with its legally binding obligations” under the nuclear Non-Proliferation Treaty, Price told reporters.

Iran’s envoy to the Vienna-based International Organizations on Monday asserted that the report on the country’s stockpile of enriched uranium was one-sided and failed to reflect Iran’s extensive cooperation with the UN nuclear watchdog.

“The IAEA Director-General’s report does not reflect Iran’s extensive cooperation with the IAEA,” Ghaebi said. “The report concludes exactly what the Director-General presented to the European Parliament before the third round of technical talks, even before the end of the steps set out in the joint statement.”