Biden’s policy in Ukraine; “Land in return for peace.” 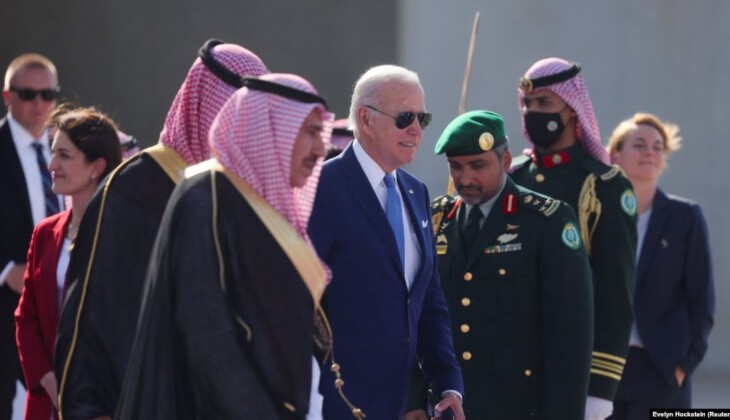 Even though the Western countries, especially the United States, have seriously been involved in confronting

and fighting Russia since the beginning of the Ukraine crisis and demanded the withdrawal of Russian forces from this country, It seems that the prolongation of the war and the increased western military experiences against Moscow have caused them to express concern about the continuation of the war.

It was not ling ago since Kissinger proposed to Zelensky to give up territory to Russia in order to save the lives of Ukrainian citizens. US President Joe Biden suggested that it might be better for Zelensky not to resist any more and go to the negotiating table by giving territory to Russia to end this devastating European war.

Despite the fact that more than four months have passed since Russia’s military invasion of Ukraine and billions of dollars in aid from European countries and the United States to Kiev to deal with Russia, last week’s summit of the G7 and NATO showed minimal attention to the issue of Ukraine. The heads of the G7 and NATO finally stopped talking about continuing financial aid to Ukraine and focused their attention on US issues with East Asia and China.

The war in Ukraine attracted the attention of the West until Russia attacked the central regions and the capital of this country, and now the Americans have apparently come to the conclusion that Kissinger’s diagnosis is correct, and perhaps the war in Ukraine should end with the separation of the Donbas region and its annexation to Russia.

At the same time, America and the West are caught up in the crisis they created. Since the beginning of the war in Ukraine, the price of energy in all Western countries has increased sharply, economic crises and food shortages in many countries of the world are well visible and there are no clear signs regarding the end of this crisis. It seems that the West, especially the United States and the Biden government, have come to the conclusion that they must end Russia’s war in Ukraine in any way possible for their country’s internal political issues.

Biden wants to end the war with a dialogue because he knows that all his trips to the region and desperate requests from the Saudi family to reduce the price of oil cannot end the economic crisis in America any soon.

Biden’s efforts to end the war in Ukraine and his administration’s decision to advance the “land for peace” policy:

In the next few months, the United States will witness mid-term congressional elections, and the Democrats are at a severe disadvantage, and despite holding congressional hearings regarding the events of January 6 and Trump’s role in inciting his supporters to attack Congress, no significant change is expected.

Trump’s people and supporters are staunch in their support to Trump and Trumpism is conquering the stronghold of all parts of America. Now, Biden no longer needs Ukraine’s victory in the war with Russia to showcase an achievement in his foreign policy. He just wants this war to end so that he can save the Democrats from ignominious defeat in the congressional midterm elections.

It is on this basis that the official policy of the Biden administration is moving towards adjusting its positions against Russia and asking Ukraine to abandon its heroic and resistant posture and face the facts. The facts that say that it is better for Donbass to separate from Ukraine, rather the whole world getting involved in a terrible economic crisis and famine.