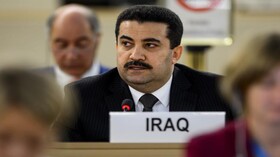 It is now close to a year since efforts are made to leave Iraq in an indetermined statelessness situation. Efforts have continued to delay elections with an excuse of lack of security ranging from social pressure and public dissatisfaction in the country and endeavoring to revive ISIS were all part of a scenario that were pursued to create political blockage/ vacuum in Iraq.

As usual, The Americans were the first group to benefit from this instability in particular, the return of security challenges to Iraq and the sporadic attacks by ISIS could justify their military presence in Iraq.

The instigation of political trends specially from the Sunni groups such as Al-Halbussi and Khanjar as well as from the Kurdistan Democratic party for not coming to an agreement on the formation of a government and also lack of agreement over the election of a president were also part of other scenarios that were pursued in Iraq.
One could say that almost every segment attached to the Americans were complete for creating a political vacuum in Iraq and even with Shiite groups a discord was created and Mughtada Sadr was fanning the flames with his unfamiliar and contradictory approaches.

Even though Sadr had declared sanction against the election, yet he took part in the election and after a while he called for a mass resignation due to disagreement with the political groups.

It was from here that with this unusual approach the term the Shiite group was changed to Shiite Coordination Framework within political literature in Iraq.

The high level of flexibility within the coordination framework was in so far, that it even avoided to omit Mughtada Sadr and its group from the political trend in Iraq.

Despite many challenges, it never agreed to create tensions within the political and internal atmosphere. They had a correct and adequate understanding of the Iraqi political equations within the region and the world and yet they worked hard to provide political stability and form a government by joining other opposition groups.

One could say that the results of this effort was the election of a man named Muhammad Sudani as a prime minister which was a significant step towards Iraq’s exit from political crisis.

Perhaps this election would face new challenges especially, opposition from the Sadr group but the joint agreement over the prime minister is by itself an important step in exiting from the current political crisis in Iraq.