Homeland in ‘Baghdad’, Dollar in ‘Erbil’/ Protest in the Barzani region 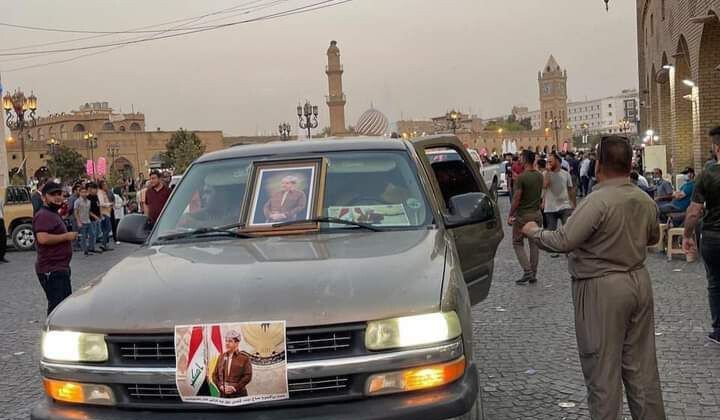 and as a criticism to the media silence, A Kurdish journalist and political activist said, “… Some are looking to Baghdad as their homeland and Dollar in Erbil.”
According to Negah No report, this sentence is an accurate comment of a dual behavior with the recent events in Iraq and what is taking place in Erbil. While in the past few days the amount and volume of media coverage has increased regarding the protests of Mughtada Sadr’s supporters in order to show the internal clashes within the Shiite groups, however, the events that occurred yesterday and were unique in its own rights were not reflected as it deserved.
This is so when over 30 reporters and journalists have either been abducted or arrested! Around 7 of the Iraqi MPs and tens more from the Aljil -Aljadid have also been arrested, over 30 military forces vehicles have besieged the HQ of the head of Aljil -Aljadid faction.
The authorities of the region in particular, the Barzani’s have continued to benefit from the internal tensions, challenges and insecurities prompted in Baghdad in order to keep clear from the central government.
Although based on the constitution, the Kurdistan region must follow the decisions made by the central government, but over the years in particular, under the activities of the ISIS they tried to benefit from a political stream caused by the instability.
This is at a time when the peaceful protests that took place yesterday in the Kurdistan region was confronted with violent reactions by the Barzani security forces. More than 7 of the Iraqi members of parliament attached to the Aljil -Aljadid faction and tens of reporters, especially, journalists from NRT network were also arrested.
The protests of yesterday were a reaction to the incompetence and corruption of the Barzani’s family who have taken full control over the power, wealth and interests of the people of Kurdistan.
It should also be reminded that in many instances the authorities of the Kurdistan region have sold the oil of this region to the Zionist regime without any approval or coordination with the central government.
One can even say that Erbil has turned into a den for the spies of the Zionist regime and a place for upscaling tensions and instigating attacks against Iran.
The Barzani’s family have kept silence for all these changes as well as dissatisfactions against the economic problems.
It seems the time is now over to undermine the authorities of the Kurdistan region.