The Passage of Mughtada Sadr From Religious Authority 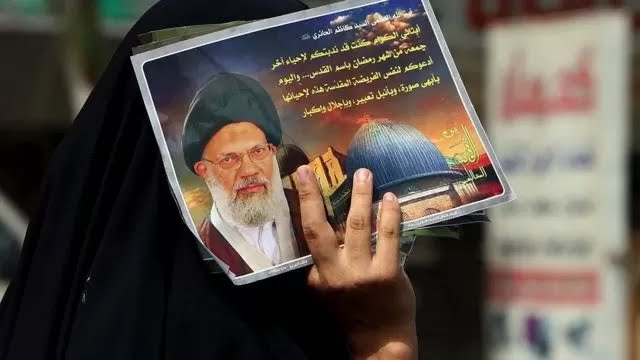 Ayatollah Sayed Kazem Hosseini Haeiri, the grand religious authority for the Shiites in Iraq announced on Monday that due to poor health he will resign from his position.

He who is a prominent religious authority for many followers of Sadr stream and Mughtada Sadr himself by resigning has indirectly addressed Mughtada Sadr, thereby, seriously criticizing the discord sown among the Iraqi people in the name of both Sadrs.
In a statement while declaring his decision and also declaring that his representatives have no longer any right to receive the sharia money from people has invited his followers and the Shiites to follow and obey Ayatollah Sayed Ali Khameini and introduced him as the most suitable person for leading the Muslim Ummah.
In his declaration he said, “ … it is necessary for the children of the two Sadr martyrs ( Mohammad Bagher and Mohammad Sadegh) to be aware that the allegiance towards those two martyrs would only be acceptable if there is belief in their good deed and by truly following their goals and should know that it will not suffice if only we claim or we have close family blood with them and if anyone tries to embark on sowing discord among the children of the ummah and the religion in their names or to take their lead while failing to have that position of jurisdiction and other preconditions for the sharia leadership he is in fact not a follower of Sadr even though he claims to be one or even having a blood relation with them.”

This grand scholar also continued in his statement that the US occupying presence in the Iraqi territory is one of the greatest harams(illegals) in the sight of God. Ayatollah Haeiri had already made criticisms regarding the Mughtada Sadr’s attempts in the past months and weeks.

In the past few days Seyed Rashid Al-Hussaini who is one of the clergies close to the grand scholars of the Shiites in Najaf city reacted to the question raised by people that the followers of Sadr stream are protesting and rallying against the parliament and the judiciary power as an upheaval against corruption, responding : “…any attempt must be initiated either by the leadership of the infallible Imam during Imam’s presence or by his representative during his absence; we must receive our legitimacy from the jurisdiction…”. His statement was seriously reacted by the followers of Mughtada Sadr within the social networks.

Following the important statement of Ayatullah Seyed Kazem Haeiri Seyed Mughtada Sadr, the leader of the Iraqi Sadr Stream declared on Monday that he never claimed to be a leader or a religious authority and will quit political activities for ever and also announced that he will shut down all offices and institutions of the Sadr stream.

For over months the Iraqi Sadr stream has instigated his followers to protest due to political differences and by occupying the parliament building have shut down the political process in the country and have delayed the formation of the new government.

Simultaneously, the Sadr followers also held a sit -down strike within the periphery of the supreme judicial court in Iraq as the most important judicial institution and forced the judicial institutions in Iraq to shut down. Moreover, in a speech delivered on 4th August, Mughtada Sadr called for the dissolution of the Iraqi parliament and an early election as he said; ‘’… after the dissolution of parliament and through a democratic procedure and an early election we will have no place for the former authorities”.

This is the fifth round of Mughtada Sadr’s retirement but it seems due to several reasons the most important of them all are the followings:
1- It appears that after Ayatollah Haieri announced he has retired from his position, Mughtada Sadr regards his position as the religious leader for the Iraqi people in full danger and by scaping forward he has admitted the top position of Ayatollah Haeiri in Najaf while overpassing him.

2- Only a short time has passed since the representatives of Sadr stream opted out from the parliament and instigated the current crisis and the ambiguity of the religious leadership has totally astonished Mughtada Sadr. Hence, this quit is a hasty and sudden reaction to the declaration of ayatollah Haeiri. By evaluating the decisions of Mughtada Sadr this trend was not to instigate simultaneous unrest both at political as well as religious leadership.

3- According to Ayatollah Haeiri’s statement currently any sharia money to be delivered to the Sadr stream is haram and illegal. The deletion of delivering money would mean that the Sadr stream will fail to be financially supported by people’s money revealing the economic dependence on the ruling structure. This is when Mughtada Sadr denied all forms of unpublic attachments and his followers.

4- The opposing trend against the present policies in Iraq under the flag of Sadr will turn angry with Mughtada Sadr’s quitting from politics. They feel that the blood of those killed in 2020 will be wasted, that it would mean they have abandoned the people of Iraq and ultimately that they have surrendered to the policies of the Iraqi allied forces with Iran

Points to consider:
1- Based on the past experiences the Sadr stream would opt for any action in order to achieve their goals and intentions. They would not mind taking Arbaeen Ziarat (march) as hostage in order to meet their goals .
2- The people of Iraq are the main victims of the unrests and upheavals and have been so for many long years due to the consistent unrest, incompetence and corruption of different streams in their country.
3- Considering the fact that millions of Iranians are ready to take part in Iraq this would be the best solution to respond to the October 2020 protests at a time when the protests were temporarily stopped and the Arabeen march was opened to all.
4- The main strategy and the key to the power of Mughtada Sadr among the people is to drive people into the streets and this has been a very successful strategy. Yet it has not always been peaceful and based on experience it has also been mingled with violence and unlike Sadr twits that encourage people to keep a peaceful protest it has nevertheless embarked on violence and physical deletion of its opposition groups ultimately, pursuing full control as a Shite household.