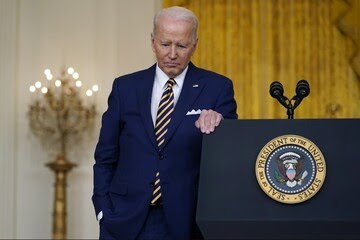 The US president Joe Biden’s popularity in the midst of economic recession in the country has declined remarkably and over 71% of the US citizens refuse to have Biden as the candidate for the next 2024 presidential elections.

According to the Negah No report based on recent surveys, the withdrawal of US forces from Afghanistan in August 2021, the inflation and energy crisis have all affected his popularity and declined it greatly.

Based on the latest surveys over 70 % of US citizens refuse to have him as a candidate for the next 2024 elections.
It appears the most important factors that affected Biden’s popularity are due to economic problems; increasing inflation and concerns due to job security. In one survey inquiring about Biden’s economic actions, 65% of the people have replied that they have reduced the number of going to the cinema or concerts or eating out, 61% have replied they drive less and 54% have reduced the number of their travel.

After the statistics regarding the inappropriate trend of the US GDP in recent years there is another bad news published about Biden’s administration which is a record-breaking rate of inflation in the country. Currently, the US is facing an 8% inflation which is fairly high for the US society. On the other hand, the energy crisis and rise in gas prices has not only increased the transportation prices it has led to a rise in products.
This is when the US citizens income does not rise with the prices and such conditions has led to increase in the prices. Moreover, decline in job security in the US, affected by the pandemic has exacerbated the situation.

In such conditions the rise in living expenditures has worried the people and the results of a survey has shown that three fourth of the US citizens i.e., over 74% of the people are dissatisfied with Biden’s approach towards the inflations and only 25% are happy with the economic policies. Experts believe that the rise in the dissatisfactions over’s Biden’s approach would acutely affect his win at the 2024 presidential elections.

In addition to the economic problems there are other reasons affecting Biden’s popularity, i.e., the abortion law, the climate change and widespread fire and its outcomes such as water pollution, the corona and monkey pox pandemic and ultimately, the violation of the human rights and his visit to the Saudi Arabia.

Biden, inconsiderate towards the murder of Jamal Khashoghchi by MBS’s order, visited the Saudi Arabia and held a meeting with the crown prince, in order to gain the Saudi’s agreement over oil production increase. But he faced a cold reply by Bin Salman and the Saudi’s disagreed with the American’s requesting an increase in the oil production. This futile trip, left Biden and the Democrats with a heavy cost and it is probable that he would not be the democrat’s candidate for the next 2024 presidential elections.

The US withdrawal from Afghanistan and Taliban’s progress in the country has drawn many critics against Biden and has led many to believe that the US is never a trustworthy ally. In addition to the Afghanistan’s adventure, Iran’s nuclear program is another dark side of Biden’s presidential term.

Another important point is Biden’s media feature and his team; his unstable mental health and his frequent gaffes has not only made him inappropriate for the next presidency, but also, he has turned into a laughing stock. One of Sky news anchors in Australia by referring to Biden’s unstable mental health said: “Biden needs a bowl of soup at a nursing home rather than access to nuclear codes.”

His consecutive mistakes and the passive status of Kamala Harris has badly affected the status of the Democrats and this is when Donald Trump is still enjoying a greater popularity.