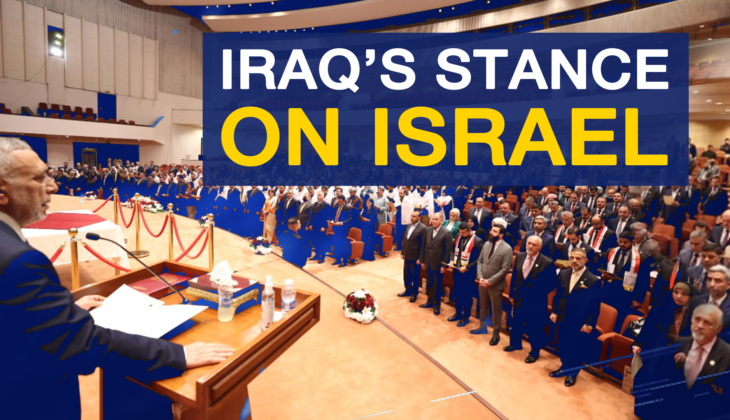 It's now illegal in Iraq to normalize relatios with Israel according to a law the Iraqi parliament unanimously passed on Thursday.

Its passage cemented the Arab countries invariable, and age old, policy of refusing to recognize the occupying regime. legislation applies to all Iraqis, governmental and independent institutions, as well as foreign nationals working in Iraq.

In a statement, the Parliament said the legislation is a true reflection of the will of the people.

On closer inspection, the law bans any relations with the Israeli regime, including political, economic, cultural, scientific, or sports related ties.

Violators of the law will face severe penalties, including life imprisonment or even capital punishment.

A most important fact is that the law was adopted unanimously meaning that all 275 parliament members who were present voted in favour of the motion.

Back in 2020, the United Arab Emirates and Bahrain entered the United States brokered “peace deals” with the Israeli regime. Some other regional states, namely Sudan and Morocco, followed suit.

Other regional countries have also been fraternizing with Israel, including Saudi Arabia, which received a visit from the regime’s former Prime Minister, Benjamin Netanyahu, in November 2020.

In late September last year, a US based think tank organised a conference in the semi autonomous Iraqi Kurdistan Region, sparking anger and condemnation.

The regional government said the conference was not ratified by any local official and that it did not reflect the views and policies of the Kurdistan Region.

But the Coordination Committee of the Shia Resistance Axis, which represents the resistance groups of Iraq, has recently warned Kurdistan authorities that their “malicious pursuit and the fire they’re trying to ignite will come back on them and burn them before it hurts others and they will only suffer disappointment and loss”.

The US State Department reacted angrily to the passage of the anti-normalization law and slammed the legislation as promoting antisemitism in Iraq and branded it as being against the principles of freedom of expression.

These facile claims can be challenged by simply taking a look at the Iraqi nation’s stance and votes. All Iraqis are against ties with Israel. How can that be contrary to freedom of expression?

Speaking about the antisemitism claim, there are Jewish citizens living in Iraq in freedom and peace, facing no problems whatsoever.

Israel has gone so far as to install espionage bases in the northern Iraqi region. In March, the Islamic revolution Guards Corps of Iran launched a barrage of missiles at targets in the region, which were said to have been secret Mossad bases, killing several Israeli operatives on site.

The Iranian Ambassador to Iraq said Israeli operatives use the Iraqi Kurdistan region to plot and launch security operations against Iran, emphasizing the Iranian officials had time and again warned the Kurdistan Regional Government authorities regarding these activities, but to no avail.

Palestinians have denounced the normalizations of four Arab states with Israel as a betrayal of their cause and a stab in the back. The normalization was window dressed as “helpful to the Palestinian cause”, but the events that unfolded over the past two years have proven it to be otherwise