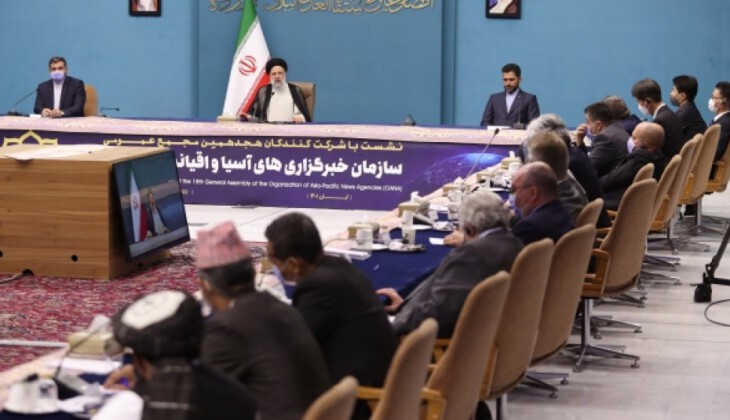 While the superpowers and the terrorist groups utilize media as a war instrument to fight their counterparts, the OANA can effectively fight back this approach through adopting coordinated policies and providing proper and widespread contents.

According to Negaheno report, the information procedure cycle in recent years and their directions in regards to weakening governance and focusing on home ruling, the users have created a new method and a new aspect to the media operation.With the weakening of the controlling system over social media the limitation over social networks has seriously declined and a new era has emerged for dialogues with different identities which has even targeted terrorism in the media.

Since the emergence of ISIS, this terrorist group as the second generation of the global terrorism spread terror and tragedy through media coverage and political violence with deadly approaches in the social media, targeting the public view and showed a new type of media terrorism within the social networks. Their interaction based on anti- power orientation in the social media raised challenges such as insecurity, instability, religious and national differences, social gaps disseminating a sense of uncertainty in the societies.

The change in the capitalist system specially after the downfall of the bi polar system led to fundamental changes in the world of media and created it into a utilizing mechanism. These changes have also reflected in the media atmosphere initially covering the virtual atmosphere and later turning it into a competitor with the real world.

The emerging point for this new generation was the result of this same era which were inherently and basically different from the main and traditional media streams.

During the 1990s the world wide web system was introduced to the countries and was swiftly widespread within a few years to all aspects of human life turning into a new era for information and media dissemination.

Moreover, the new media paradigm has created new changes for introducing new identities. Within the same framework and in relation to some of the socio-political changes the media technologies have been prepared to strengthen and formulate extremist networks and organizations.

The Concept of Media Terrorism One should say that media terrorism means the use of plans and functions of the mass media for furthering terrorism and intimidation in the target countries. This term was first introduced in 1985 in the second international conference on terrorism.Now the media terrorism applies to the use of media and social networks for increasing the impact of violence due to social, political and religious reasons with the aim of spreading mental, emotional and physical pain and grief to the users in a direct way.
In fact, by enforcing violence in this way they try to achieve three objectives namely, attraction, recognition and legitimization. The main activity of the terrorist groups within the social networks is to aggravate political violence. ISIS was one of the main terrorist groups to utilize the media as a terrorist tool disseminating propaganda, attraction, assistance, radicalization, deviation and recruiting and training, holding ties and plotting and operating invasions.In addition, by creating discussion rooms and electronic groups, associations, and social media and taking part in different platforms such as UTUBE, Facebook, Twitter, etc. they disseminated their mind set.