Intl. Quds Day: An existential threat to the hegemonic power 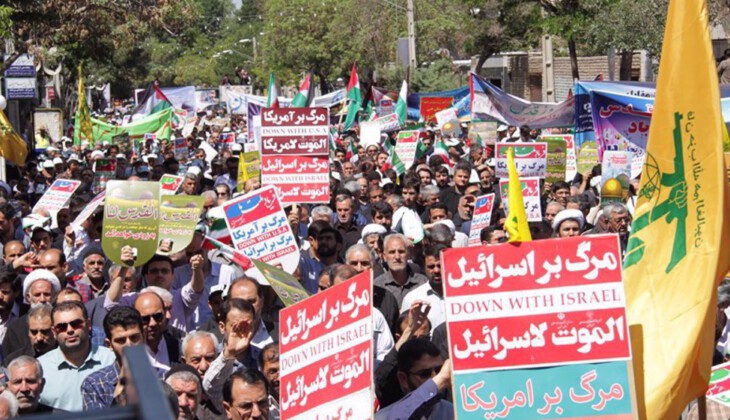 newvisiona-By Batool Subeiti: Every year without fault, swathes of the world population have gathered in every corner of the world, flying the flag for Palestine whilst bolstering the resistance front.

But what is it in particular about the Quds Day marches that has triggered hefty counter demonstrations and mammoth efforts to get it banned, as has been the case in Berlin? This article seeks to break down the philosophy behind Quds Day, that singles it out as one of the strongest forces of mobilization and change against the unjust status quo, which the enemies of liberation fear greatly.

Quds Day calls for international grassroots mobilization, transferring the confrontation from one confined in the region of West Asia, to concerning the masses of the world. In the same way the world superpowers conspired to uproot the Palestinian nation and established the Wrong State, from Britain, to the United States and the Soviet Union, reversing this biggest shame to have occurred before the conscious of the world requires a global effort of unity. Quds Day raises the slogan of complete liberation for all historic Palestine, and it is unity in potent solutions reflecting the true reality on the ground, that the hegemonic powers fear.

Mobilization occurs on a yearly basis, irrespective of whether there are heightened aggression by the occupation forces, as the partial issues themselves are not the frame of reference, such as the transgression on Al-Aqsa Mosque, the release of prisoners, dismantling the settlements in the West Bank etc. The dismantlement of the Wrong State is echoed as the only way to achieving justice and the only solution to this is through armed struggle until liberation.

Imam Khomeini chose a significant time for the Muslims, a Friday and during the Holy month of Ramadan where they are fasting and engaging in perpetual worship, signifying the act of resistance against systems of oppression is a religious duty before it is to be classified as socio-political activism. Once the seeds have planted in the hearts of two billion Muslims globally that Palestine is an obligatory religious commandment, a strong united front is formed that cannot be broken by the hegemonic Powers, as the basis for unity is God Himself.

Quds Day centralized the Palestinian cause as the cause that all Muslims should unite on. From a religious perspective, all Muslims unite on the fact that this is a blessed land, it is the third holiest site in the religion, it is the lands of the Prophets of God, and this land has been usurped. Palestine therefore represents the point of unity between the Muslims and all justice seekers of the world.

One of the greatest tactics of the enemies of liberation is to split the Muslims and to use the cover of sectarianism, because the reality is that they bet on this weakness. It is not the strength of the aggressor that allows the unjust status quo to continue, but the weakness of the oppressed.

The stance of the Islamic Republic revived the Muslim Ummah at large, at a time when it was in complete slumber, humiliation, captivity to external aggressors, and those four decades post the Islamic revolution cannot be compared to the decades before it, as the revolution line breathed life into resistance movement in the region that took up arms and forced the change.

From a political perspective, centralizing the Palestinian cause signifies the unique nature of the Palestinian oppression, that took the form of the world superpowers conspiring to steal a land, uproot its people and maintain a perpetual hegemonic order feeding their interests.

Al-Quds day was the first call of its kind for all people of the globe to rise and mobilize, and until today there is not a single day stamped in which people globally come out for the cause of Palestine, irrespective of the regional developments.

Since this day is stamped, it will continue to be commemorated for eternity, even after Palestine’s liberation; Quds Day will still be commemorated and the call for the liberation of all oppressed will be in light and legacy of Palestine.