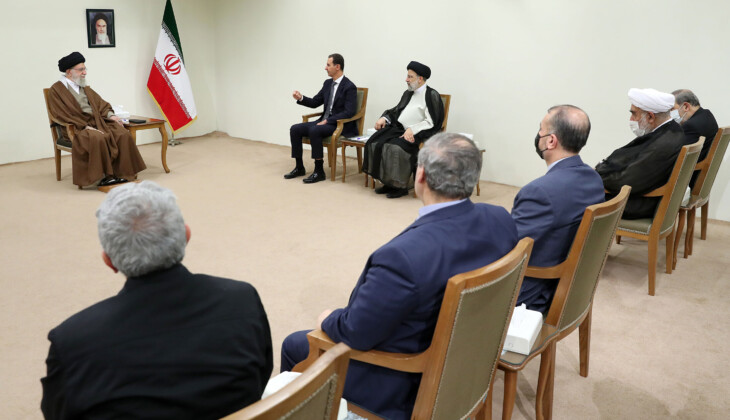 Regarding President Bashar al-Assad visit to Iran, Khalaf al-Muftah, a well-known Syrian journalist said : "This visit is of strategic importance in the current situation and boosts the ideological and resistance ties between Tehran and Damascus."

In Mr. Khalaf al-Muftah opinion, The importance of Bashar al Asad’s visit in the context of both the Ukraine issue and the Iranian nuclear talks, just prior to the visit of Enrique Mora and the Emir of Qatar, is a very important point and conveys a fundamental message to the West, the United States and its allies.

One point is that there is always an attempt to create a strategic distance between Iran and Syria, at times there were attempts to give Damascus incentives to stay away from Iran. He added: “Damascus has always stood by the axis of resistance and the crisis that Syria has witnessed in recent years was due to supporting the axis of resistance and standing by this issue.” In fact, Syria paid for this issue. Syria supports Iran, and accepts the leadership of Iran, which follows the discourse of an Islamic authority.
He added: “What I can say today about Bashar al-Assad’s visit to Tehran is that this is his second visit to Iran since the beginning of the Syrian crisis in 2011 and it sends out a message that is contrary to the stories and conspiracies that are being told .” The political structure of Syria is stable.

Secondly, with the pressure of the West on Iran to reduce its regional role(this was one of the conditions of the Americans in the Vienna talks,)but Bashar al-Assad’s visit to Iran carries the message that Tehran will never give up its role as a regional axis leader and Resistance and support for Palestine will not stop.

The Syrian journalist said that today Syria is the frontline of a war against the resistance, adding that such a visit sent a strong message to the Americans and the Israelis, especially at a time when the Zionist regime is taking strict measures and approaches in Al-Aqsa Mosque. And it seems that by exploiting the war in Ukraine, Israel is trying to keep its surroundings safe, in fact, everyone thought that with the current pressures on Iran, especially economic pressures and US sanctions and preconditions for Vienna talks, the issue of supporting the resistance and Tehran’s relations with the axis of resistance, especially Syria, may slightly be diminished, considering there was pressure and also few Arab countries were trying to get closer to Syria, but this showed that Tehran’s relations with Damascus is not a tactical relationship but a strategic one.