Exclusive interview with Sergei Bordylyak »Ambassador of Ukraine to Tehran 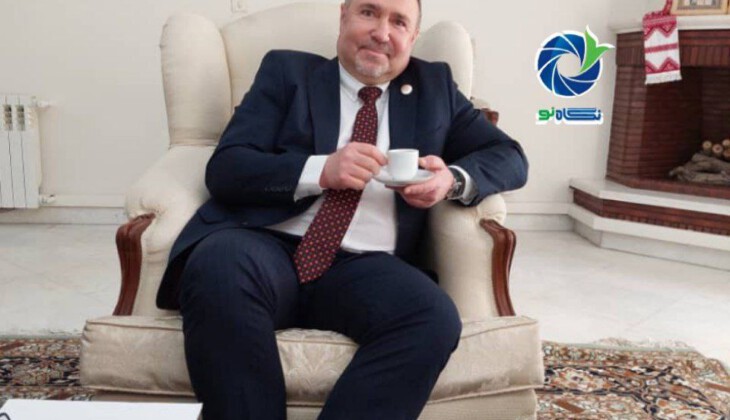 He continued: “Until 2014, we always had a diplomatic relationship with Moscow and tried to solve all the problems through diplomatic means.” The situation that existed until 2014 was in favor of Russia. Since the Russians were in present in the running government at the time, and Russian citizens with Russian citizenship were in a good position.

He continued: ” Three times the Russian Federation had formally guaranteed the sovereignty and territorial integrity of Ukraine in the form of a contract and a memorandum of understanding.”

The first time was in 1991, at the beginning of the collapse of the Soviet Union in Belarus, the presidents of the former Soviet Union met and signed documents and protocols that defined the borders of Ukraine and emphasized on the territorial integrity of Ukraine. The second time was in 1994 in Budapest, the guarantee of Ukrainian sovereignty was again reiterated.

He went on to say that Yeltsin had signed the guarantees again in 1994, and that the presidents of other countries had done the same.

On t all he third time, Russia and Ukraine signed an important agreement on friendship, peace and cooperation between the two countries. Mr Putin signed the agreement at the time.

The Ukrainian ambassador in Tehran stated: Russia first violated these guarantees by occupying the Crimean peninsula and then attacking Luhansk and Donsk. The third time was a full-scale invasion of Ukraine which took place a few months ago.

On Explaining Israel’s involvement in the Ukraine crisis, he claimed that isreal had been neutral since the start of the war, but after Russian Foreign Minister Lavrov declared that Hitler was a Jew, Israel’s position changed completely and sided with Ukraine.

In response to the question that world politicians believe that the international community cares about the Ukraine crisis and does not care about the Palestinian issue, Ukraine’s ambassadorI said :” I must say that in December 2016.

, when Ukraine was a permanent member of the Security Council, passed a resolution on Israeli settlement. Condemned, voted in favor. Although our relations with Israel are good. We had the choice not to vote for this resolution, but we decided and felt that it was fair.

We also voted in favor of a resolution which recognized Israel as an occupier in 2016, but the question is, what has Ukraine achieved in response to this resolution? Except that it has damaged its economic relations with Israel. In spite of having good relationship with Tel Aviv.

Ukraine was recognized as a hostile country to Israel, and talks to establish free trade zones and military cooperation with Tel Aviv were was suspended.
Israeli Prime Minister Benjamin Netanyahu also canceled a visit to Ukraine, reducing Tel Aviv’s relations with Kiev to a minimum. He added that Ukraine had no concerns wit regards to considering Israel an occupier.

Regarding political support for Palestine, the Ukrainian ambassador said, “As it has been emphasized on justice in Qur’an , we too have no worries about it because we believe that Ukraine’s position was based on justice.”

With regards yo NATO’s role and it’s claims to support Ukraine, and considering that if it were not for NATO’s response, this crisis might not have arisen, he said: “It is true that Ukraine had applied to join NATO, and thinking it would be a guarantee of Ukraine’s national security.
NATO has supplied arms aids to Ukraine.

Years prior to the war, the NATO Secretaryhad said that we could not accept Ukraine as a member of NATO. German Chancellor Angela Merkel and Boris Johnson and Emmanuel Macron all said we are not ready.

Russia began the conflict under the pretext of NATO missiles, and now Finland and Sweden also feel threatened and have formally applied to join NATO, therefore according to this logic of Russia, attacking Ukraine because of NATO’s expansion to the eastern borders, Russia has to move towards northern borders

He continued that the war in Ukraine will not end soon and will continue longer.