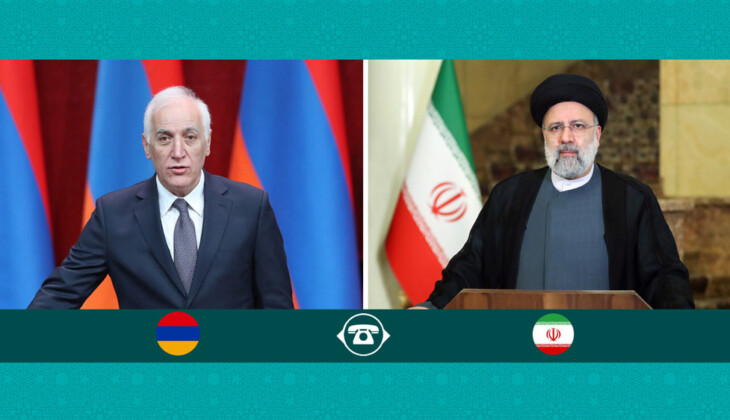 Iran’s President Ebrahim Raeisi has warned against Israel's plot to infiltrate into the region, urging regional nations to remain fully cautious in the face of the Tel Aviv regime's attempts to gain a foothold there.

In a phone call with Armenian President Vahagn Khachaturyan on Wednesday, Raeisi said the Zionist regime is by no means a friend of the regional nations, adding that it has committed “unprecedented” acts of oppression against the Palestinian people.

He pointed to the dispute between Azerbaijan and Armenia over the Nagorno-Karabakh region and reiterated Iran’s support for the advancement of peace talks between the two countries.

Raeisi expressed hope that the remaining issues between Baku and Yerevan would be solved peacefully in accordance with international law while respecting the two sides’ territorial integrity and national sovereignty as well as rights and security of the people in the Caucasus region.

“The Islamic Republic of Iran is deeply committed to the point that regional issues must be resolved through consensus and cooperation among all countries in the region and on the basis of common interests and mutual respect,” the Iranian president added.

According to reports, Armenian Prime Minister Nikol Pashinyan and Azeri President Ilham Aliyev announced last month that their respective countries would be setting up border security and delimitation commissions, signaling a step towards the settlement of a decades-long conflict over the Nagorno-Karabakh region.

Pashinyan and Aliyev met in Brussels in April for rare talks mediated by the European Council President Charles Michel.

Tensions between Yerevan and Baku remain high more than a year after the arch-foes fought a war over the disputed Nagorno-Karabakh region. The six-week conflict, which claimed more than 6,500 lives on both sides, ended in November 2020 with a Russian-brokered deal that left Azerbaijan largely in control of the territory.

Nagorno-Karabakh is internationally recognized as part of Azerbaijan but has been populated by ethnic Armenians. Russia has deployed 1,960 peacekeepers to the region for an initial five-year period. Since the truce, the two sides have accused each other of breaching the peace deal.

The Iranian president further warned against Israel’s plot to infiltrate into the region and urged regional nations to remain fully cautious in the face of the regime in order to prevent it from gaining a foothold.

He said the Zionist regime is by no means a friend of the regional nations, adding that it has committed “unprecedented” acts of oppression against the Palestinian people.

Raeisi said Tehran supports the expansion of bilateral and multilateral cooperation in the fields of energy and transportation which would promote peace and stability and ensure economic prosperity in the region.

“As part of its principled policies, the Islamic Republic of Iran emphasizes and heeds preservation of the regional geopolitics, including international borders, respect for national sovereignty of countries and strengthening of the inter-regional communication infrastructure,” the Iranian president pointed out.

The Armenian president, for his part, commended Iran’s important and effective role in the region and its stance on regional developments.

Khachaturyan said Armenia is keen to boost economic, trade, political and cultural cooperation with Iran, noting that regular sessions of the two countries’ joint economic committee would certainly facilitate the expansion of relations.