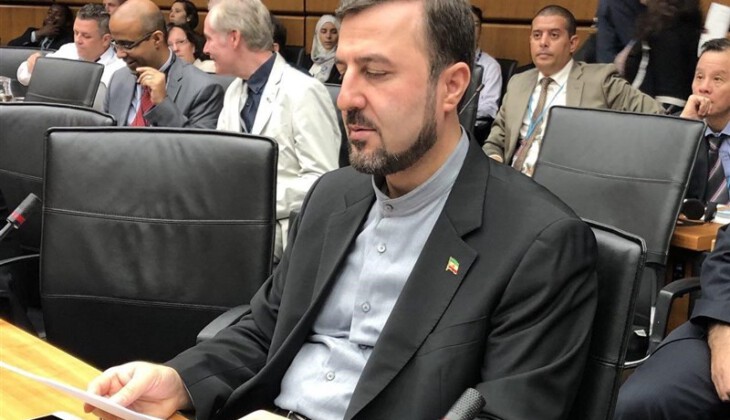 Qaribabadi urged the International Atomic Energy Agency, specially IAEA Director General Rafael Grossi, to refrain from pursuing a political agenda of any sort in his work, and said that the Islamic Republic will firmly stand against an anti-Iran resolution at the IAEA Board of Governors.

“The agency submits two separate reports to each meeting of the Board of Governors, one on Tehran’s compliance with its nuclear-related obligations and another on its compliance with the NPT Safeguards Agreement,” Qaribabadi, also Iran’s former envoy to the IAEA, said.

He pointed out that there has not been problem with the first report, but in its second report, the IAEA claimed to have documents showing nuclear-related activities in some sites and called on Iran to cooperate with the agency and clarify the matter.

“The Islamic Republic of Iran, for its part, cooperated with the agency in good faith and on the basis of transparency,” Qaribabadi reiterated.

He also said that Iran provided adequate explanations to the IAEA after tiny amounts of nuclear particles were found in one or two locations.

“I think there are two main reasons why the IAEA has amplified the issue and put it high on its agenda. One reason is the constant political pressure that the United States, some Western countries, and the Zionist regime have been exerting on the agency,” Iran’s deputy judiciary chief said.

“I hope that Western countries and the US would come to their senses and opt not to officially submit the resolution, because they know the move will further complicate the situation. I hope they would not take such a destructive step. I am opposed to any resolution against the Islamic Republic of Iran, whether at the IAEA Board of Governors, the Security Council, or the UN Human Rights Council,” he added.

On June 1, Iranian Foreign Ministry spokesman Saeed Khatibzadeh said the country will respond strongly and proportionately to any “unconstructive move” at the upcoming meeting of the IAEA Board of Governors.

The warning came a day after Iran dismissed the agency’s latest report on its nuclear program.

Iran has also repeatedly cautioned in the past that adoption of an anti-Iranian resolution was counterproductive to ongoing talks aimed at reviving a 2015 nuclear deal between Iran and world powers.

The remarks came concurrent with meeting of the IAEA’s Board of Governors. The event is reportedly set to adopt an anti-Iran resolution, drafted by Britain, France, Germany, and the US, to accuse the Islamic Republic of withholding cooperation with the agency.

The expected adoption of the resolution also comes following a trip by Grossi to the Israeli-occupied territories.

Iran has previously cautioned the IAEA against allowing the Israeli regime—which is leading a constant bid aimed at incriminating Iran’s nuclear work—against allowing Tel Aviv to influence the agency’s independent mandate and decision-making.

The Israeli regime continues to be the sole possessor of nuclear arms in the Middle East region, with a stockpile of hundreds of atomic warheads. Due to the cover provided by the US and Europeans, however, the regime has always refused to open up its nuclear sites to IAEA inspectors and also refused to join the Nuclear Non-Proliferation Treaty (NPT)