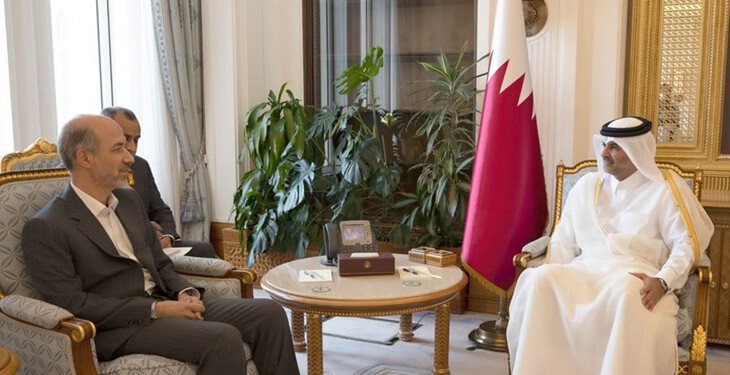 Mehrabian said on Monday that the Iranian trade center will be launched in a prestigious building in one of Doha’s top neighborhoods.

“The permit for this center was issued today and one of the best buildings in central Doha, in a very good location, was allocated to the center,” he added.

Mehrabian arrived in Doha on Sunday to co-chair the eight round of intergovernmental committee meetings between Iran and Qatar. His trip marks a major breakthrough in the growing economic ties between the two countries

A senior trade and business delegation accompany Mehrabian and other government officials during the visit to Doha.Iran and Qatar held the eighth meeting of the Joint Commission for Economic Cooperation, and signed a memorandum of understanding to increase bilateral economic and trade cooperation on Monday.

An Iranian delegation headed by Mehrabian attended the eighth meeting of the Joint Commission for Economic Cooperation between Iran and Qatar in Doha on Monday.

At the end of the joint commission meeting, Iran and Qatar inked a Memorandum of Understanding (MoU).

The MoU is in the fields of transit, transportation, industry and trade, energy, customs and free zones, tourism, cultural heritage, agriculture, sports, etc.

The Iranian energy minister, who chaired the meeting of the joint commission, said that the 13th administration in Iran has focused on expanding relations with the world and regional countries, and expressed the hope for a significant increase in bilateral relations between Tehran and Doha after the meeting.

“One of the most important goals of the meeting is to support the Iranian and Qatari private sectors, and we are happy to see that a large conference with the participation of Iranian businessmen is being held in Doha at the same time as the meeting of the joint commission,” Mehrabian said

“During the day, eight very important memoranda of understanding on food, medical industry, knowledge-based companies, etc. have been signed between businessmen of the two countries, which indicates the existence of a suitable market for the two countries,” he added.

The Iranian energy minister continued that Iran and Qatar have set financial goals for 2023 and hope to see doubled economic relations and trade balance between the two countries.

Referring to the 2022 World Cup in Qatar, Mehrabian said that the Qatar World Cup is definitely one of the golden opportunities for business people, which can enhance economic and trade relations between the two countries in various ways.

Mehrabian and Head of Qatar Petroleum Saad Sherida al-Kaabi in a meeting in Doha on Monday called for strengthening Tehran-Doha cooperation.

During the meeting in the Qatari capital, Mehrabian and al-Kaabi explored avenues for bolstering and reinvigorating bilateral relations in different fields.

“Iran is interested to further expand relations between the two countries in various fields,” Mehrabian said during his meeting with al-Kaabi.

Describing the cooperation capacities of the two countries as appropriate, Mehrabian called for removing the existing obstacles.