How long can Johnson last in Number 10? 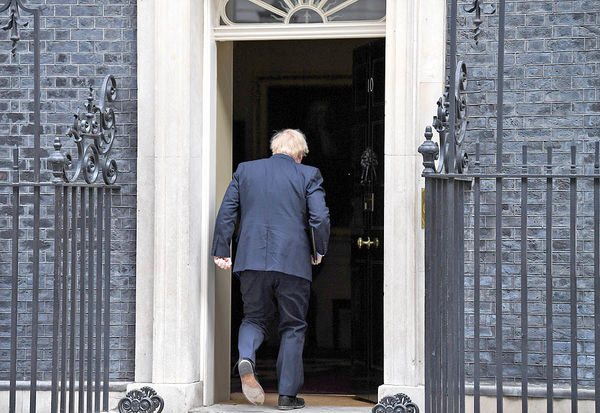 Although Boris Johnson survived the impeachment with the consent of the majority, it can be said that his popularity as a Prime Minister is declining.

According to Negah No, last night, British Prime Minister Boris Johnson was impeached within the party for holding a party at the height of Corona lockdown but Mr. Johnson was able to stay in power with 211 votes in favor and 148 against. The meeting came after a wave of criticism and attacks on Johnson over his partygate, exposing him to charges of hypocrisy, inhumanity and misconduct.

Boris Johnson’s attendance at a party on 10 Downing Street (Prime Minister’s Office) provoked public opinion and was attacked by political parties and his opponents.

As the lockdown rules prevailed and those who disobeyed were dealt with, pictures were released of the Prime Minister showing him attending a party of about forty people without observing health protocols.

This decreases his popularity, and according to a poll, Boris Johnson’s performance approval rating reached its lowest level.

Sue Gray, a senior municipal services official, released a report revealing that celebrations were held at Johnson’s offices and residence during the lockdown law enforcement period. He gave a report to Downing Street that included revelations about the Prime Minister’s party.

After this, Johnson faced criticism, with many asking him to resign. In response to these criticisms, Johnson had always insisted that he would accept his mistake, but would not resign.

Although Mr. Johnson survived the impeachment with the consent of the majority, it can be said that due to these reasons, his prime ministership is declining.

First, 41% of MPs within the party, many of whom owe their seats to his victory in the 2019 election, do not think Johnson is the right person to lead their party and country.

According to Conservative Party law, Mr. Johnson can not face a no-confidence vote for at least 12 months, but if the majority of party MPs want him to leave beforehand, that law will change.

The third reason refers to the partygate story itself, which the Conservative Party cannot ignore. How can it be justified that people could not see their loved ones in the hospital, say goodbye to their dying loved ones, and could not hold a funeral for their friend or relative; But at the same time, behind closed doors, the Prime Minister and his entourage held a party that violated lockdown protocol, social exclusion and compulsory masking laws.

With a majority of voters in the Conservative Party following the strict Covid protocol, breaking the law by the party leader and his staff was a severe blow to voters’ confidence; a point that the party can not ignore.

Based on this, Jess Norman, the former British Deputy Secretary of the Treasury, issued a letter of no confidence in the party , telling Johnson that it was ridiculous to call himself approved after his impeachment. He wrote on Twitter:
“I have been supporting Boris Johnson for 15 years as mayor of London and as Prime Minister. “In the letter I wrote to him, I explained that I could no longer support him.”

The question to ask now is, has partygate irreversibly eroded Johnson’s popularity with voters? Will the Conservative Party face the challenge of voter distrust?