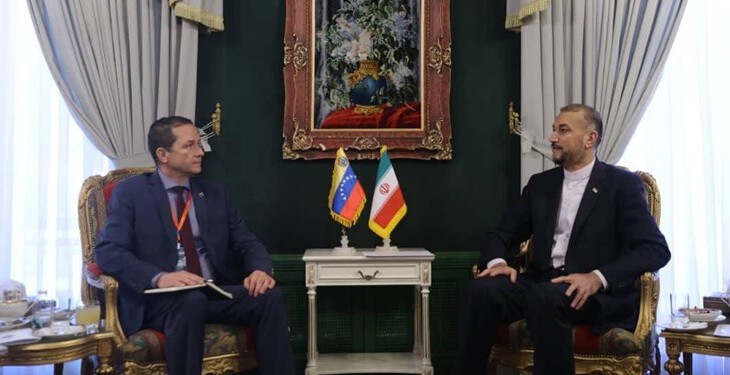 Minister Hossein Amir Abdollahian and his Venezuelan counterpart Carlos Faria in a meeting in Tehran explored avenues for the further expansion of relations after the two countries signed a 20-year comprehensive roadmap for cooperation.

The path of deepening the cooperation between Iran and Venezuela will be broadened more than before with the endorsement of the comprehensive roadmap of cooperation, Amir Abdollahian said in the meeting on Saturday.

Amir Abdollahian expressed the hope that the ground for implementing the 20-year document will be applied with the boost of contacts and exchanges of visits in the future.

Faria, for his part, emphasized that there is a good opportunity to enter a new round of cooperation between the two sides, noting that Venezuela admires Iran’s progress in the fields of knowledge-based economy, industry, and other fields, specially under the unilateral sanctions.

He underscored that Venezuela fully agrees with the Iranian authorities’ argument that the sanctions can be an opportunity.

In relevant remarks on Saturday, Iranian President Seyed Ebrahim Rayeesi lauded the strategic relations between Tehran and Caracas, and expressed the hope that the two countries will further strengthen their cooperation in future.

“The two countries would keep up their cooperation by signing a 20-year cooperation document,” the Iranian president said addressing a joint press conference with Maduro in Tehran.

“Iran has always sought to have ties with independent countries and that Venezuela’s resistance against imperialism and enemies was exemplary,” he added.

The Iranian president said that as the White House press secretary has confessed the US’ maximum pressure policy has failed and this is a victory for the Iranian people and a failure for the enemy.

“The Venezuelan nation, which has had difficult years under US sanctions, has been determined to stand against the enemies,” he added.

President Rayeesi said that Venezuela has left hyperinflation behind and resumed economic growth, adding that it proved that resistance had worked and forced the enemy to withdraw.