Joe Biden’s trip to the region – goals and impact 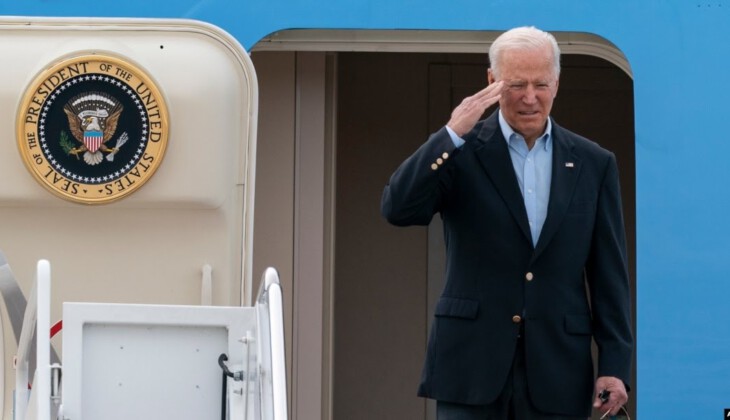 The Democrat President of the United States, Joe Biden, is going to visit the West Asia, in particular, occupied Palestine and Saudi Arabia. This trip has many goals.

According to Negah No, many questions arise regarding the purpose of this trip and its impact for America, the region and the international arena.

The Zionist regime is trying to show this trip as America’s renewed support for this regime and the key to the formation of a regional coalition of America’s Arab allies with Israel.

The huge Zionist official and media positions the past one month is an sign of this approach.
The Zionist regime is trying to somehow manage this trip in line with its goals.
However, according to the official and unofficial statements of the Americans, placing a regional alliance with Israel on Biden’s trip is accompanied by many doubts.

Jack Sullivan, the National Security Adviser of the White House, has put forward the latest American approaches in this regard: Washington is not seeking to build a missile defense shield during the regional visit of US President Joe Biden to the region.

The ruling regime in Saudi Arabia, and especially Mohammed bin Salman, also pursue their own agendas in this trip.

Because of King Salman’s old age and his illness, Bin Salman has a thirst for kingship, he is trying to take advantage of this trip in order to establish his succession.

Bin Salman faces several major challenges on his way to the kingdom. His crowning has been done by misusing his father’s power and against the family tradition, and for this reason, he has many oppositions among the Al Saud family.
Although he has eliminated, suppressed, imprisoned or weakened many, still there are potential and possible protesters , Bin Salman repressive measures have increased the quantity and quality of the protesters. It has been reported officially and unofficially that
until now, there have been several assassination attempts within the family against bin Salman.

The issue of Saudi Arabia’s entry into the Yemen war and the failure to end the war in favor of Saudi Arabia and its consequences is another important challenge for the young Saudi power seeker.

Saudi Arabia has hugely suffered financially by entering into this war, to the point where it has faced a heavy budget deficit for the first time and has been forced to choose economic austerity and reduce subsidies and increase taxes, which are matters of wide protests. .

Bin Salman’s next problem is the change in the two-pole structure of Saudi power, religion and politics.

Since coming to power, Bin Salman has tried to distance Wahhabism from the Saudi power structure and to maintain the political power exclusively . This issue has been accompanied by widespread protests by the Wahhabi movement, to which the Saudi crown prince’s reaction has been an iron fist.

There are several reports of widespread arrests of Wahhabi scholars and sometimes their tortures and even murders.

The American government also pursues its goals in this trip. The Democratic government is on the verge of elections in late summer. The polls are not in favor of the Democratic Party. Therefore, the Biden government seeks to create an opportunity or use any opportunity to change the polls. The occurrence of several shooting incidents in America was seen as an chance, and the official positions and Democratic media widely addressed it and tried to create a wave of opposition to the free sale of weapons in American society, because the majority of shareholders and dealers in America belong to the Republican party.

The war in Ukraine and the increase in energy prices around the world and of course in America is another problem of the Biden government.

With the embargo on Russian oil and gas, which supplies about 7 million barrels per day of the global market, the concern about the lack of energy has affected the whole world and has included price increases in all areas of goods and services. Therefore, finding an alternative to Russian energy is assity.

America is a declining power and there are a set of world powers considered as its competitors. Therefore, US has considered weakening and, if necessary, removing these powers from the top of the world power pyramid as a priority of America and
included it in Washington’s strategies since about three decades
ago

Russia is considered a threat to US, along with China and India, due to its military strength and vast territory, as well as rich mineral resources needed by the globally.

Since the direct involvement of the United States in war with countries like Russia,China and India result in its destruction, contrary to its strategies for small countries such as Afghanistan, Libya, Somalia, Iraq, Syria, Serbia, Panama, etc., it has chosen a strategy of proxy war.

The war in Ukraine is defined in this framework to weaken Russia’s military power and also to reduce its sources of income by sanctioning and to cause the collapse of Russia from within with economic pressure.

The 40 billion dollar US aid to Ukraine is evaluated in this regard. That is, US pursues its goals by defining and managing proxy war, Conditions that can be envisioned for China and India in the future.

Europe is also forced to accompany US in the war in Ukraine as it is highly concerned regards to Russia’s victory and the actualization of this country’s threats against Europe. Therefore, it has to accept the heavy cost and consequences of this war and despite its dependence on energy and many strategic goods to Russia, it has joined the embargo regime against Russia, but it still expects to define alternative resources with the help of the United States.

The US President’s request to Riyadh that during his visit to Saudi Arabia, a group of regional government leaders should be present (similar to Donald Trump’s visit to Riyadh) and periodic visits by Muhammad bin Salman to some countries in the region (apart from the invitations sent to many Islamic leaders) are considered by experts in this connection.

Saudi Arabia and the UAE play a leading role in the war in Yemen. Both countries are also oil exporters, but in the best case, if their energy production and export structures do not face any threat, they can eventually have nearly three million barrels of additional oil production, which, including some small producing countries, will eventually reach 4 million barrels.

Despite all this, the world energy market is still facing a shortage of at least 3 million due to Russia’s sanctions, so experts emphasize that Iran is the only country that is capable of replacing it, and arrangements must be made so that Iran’s oil and gas can enter the world markets again.

The official request of the European troika to the US for a quick agreement with Iran is defined in this direction. America and Europe cannot ignore the continuation of the war in Ukraine, and on the other hand, the Russian embargo leads to increasing problems for Europe and US, which can be beyond their capacity, especially since winter is coming and the lack of energy leads to increased crises and even internal or regional conflicts, especially in Europe.

The US and NATO can only engage in a short conflict, they are not prepared for long-term hostilities due to the depletion of their weapons stockpile.

These conditions alone may compel the United States and NATO to contribute to the end of the conflict in Ukraine.

If the conflict continues, given the new arms procurement, the West will not have enough arsenal to support Ukraine at the same rate.
According to Admiral Tony Radakin, the Chief of the British Defense Staff, the high rate of arms consumption in Ukraine has exposed the problem of lack of production capacity to replenish stockpiles.

In addition, there is another threat to NATO countries: if the conflict zone expands beyond the borders ofine, the alliance will have to fight Russia with a small number of weapons in a larger area.

The reduction of American strategic reserves to 3% is also the reason. A decrease that has been unprecedented in the last forty years. This is while Iran is currently the second country with known oil reserves in the world, which has been kept away from the world market due to sanctions.

The statement made by the French President Emmanuel Macron, “the ties between Iran and the United States should be opened and Iranian and Venezuelan oil should flow into the world markets”,is also an important indicator of the concerns of Europe and the West regarding the continuation of the sanctions on Iran.

From the media and political positions of the western countries, it can be understood that they are not only worried about the continuation of sanctions on Iran for their economy, but their concern is that these sanctions have not lead Iran to surrender, but have caused Iran to grow in the economic, military and security fields, and now with the leadership of the integrated axis of resistance, it is emerging as a regional power that can play a role in the world and there is a concern that the continuation of sanctions will increase the power and authority. Iran should lead beyond the region and transform all global equations and the defined international system. Therefore, Saudi Arabia is forced to end the war in Yemen for both internal and regional reasons, and this is a serious demand of Iran and the axis of resistance. If the attacks on the energy production and export structures of Saudi Arabia and the UAE by the Yemeni resistance continue, these countries will not only be unable to increase production, but the production and export of the same amount will also face a sharp decrease.

If America and the West are looking to increase oil and gas production in the region, they are bound to take Iran’s security considerations into account at the regional level. The expansion of security threats against Iran can actually cause the West’s expectations in this area to be unfulfilled. For this reason, restraining the Zionist regime from spreading threats against Iran can be considered one of the most important goals of Biden’s trip to the region. Experts evaluate the liquidation of the current Zionist government and the replacement of Lapid as a prelude in this regard.