the visit of Erdogan and Vladimir Putin to Tehran 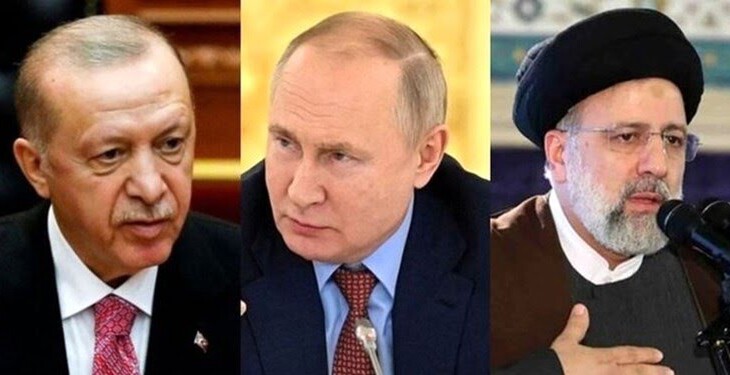 ‏Undoubtedly, the visit of Erdogan and Vladimir Putin to Tehran can be considered a political event that dominates the developments of the past few days in the region, as the Americans tried to set a new narrative with regards to Biden's visit to the region.

‏Especially, the western media tried to highlight the issue of Arab NATO and Iran’s political isolation and maximum pressure on Tehran in their news packages.
The frequency and volume of news against Tehran, which existed in dealing with the news of Biden’s trip to the region, had the least impact on the political, social and even economic atmosphere of Iran.
Increased level of economic cooperation between Putin and Erdogan in Tehran, as well as the political messages of this meeting, completely disrupted the Americans’ planning to change the equation in the region.

‏The way Supreme Leader of the revolution received Putin, as well as the content of the Leader’s speech, in the meeting with Erdogan, had important political messages, and the most important messages were looking to the east and looking to the neighborhood, focusing on the commonalities of the parties and the new economic market.

The meeting of the Supreme Leader of the revolution with Putin, which was uniquely different in its kind in compairson to standard customs of diplomacy and diplomatic ceremonies, became the prominent topic of the world media more than anything else and it brought the message that Tehran and Moscow are determined to strengthen their economic and political cooperation more than ever.
‏It can be said for sure that this political event was cold water on a fire that, a fire thought it had no effect, but the Westerners tried to create a new chapter of insecurity in the region and maximum pressure on Iran by gaining a regional consensus.