A realistic response to an important question regarding Gaza:

Has Hamas abandoned the Islamic Jihad? 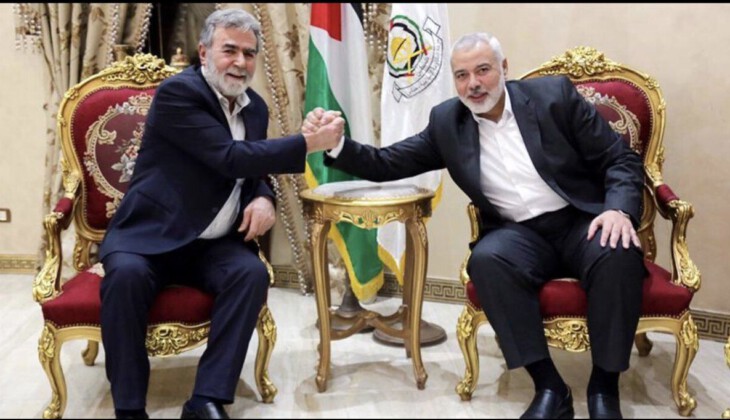 In the recent conflicts which lasted only for three days there are several questions to be answered; Why did Hamas movement not intervene? This report will respond to some of the questions.

According to Negah No report, on Friday afternoon the Zionist fighter aircrafts bombarded the Saraya AlQuds forces affiliated to the Islamic Jihad in the North of Gaza strip.

The secretary general of the Islamic Jihad movement in a reaction to the Israeli attacks to Gaza declared, that the enemy will have to wait for a war. Tel Aviv will be the main targets of our rockets!
On Sunday for a third day the counter attacks continued between Islamic Jihad and the occupied regime and as before children and the youth were the main victims.
Some sources announced that the Iraqi hackers conducted widespread cyber-attacks against the iron dome and the alert systems in Sderot.

Many regional countries including Iran, Turkey, Algeria, Tunisia, Jordan, Qatar and Kuwait condemned the attacks by the occupied regime of Israel against the oppressed people of Gaza. Jamal Ryan the famous Al-Jazeera commentator twitted: “I witness God that Iran has not abandoned Palestinians like the Arabs. Thank you, Iran.” According to some sources Al-Jazeera has reiterated that the peaceful agreement of the situation as a result of the request posed by the Islamic Jihad guaranteed by Egypt has reached a deadlock.
Widespread efforts have taken place by Egypt to control tensions and prevent clashes with failures in the negotiations. The Islamic Jihad had requested Egypt to guarantee the prisoners and prevent the attacks and invasions by the Zionist regime.

Certain points are to be considered. The recent tensions took place when Israel arrested Bassam Al Saadi, one of prominent commanders of the Islamic Jihad and his group threatened that they will react in Gaza if he is not to be released.
After this warning, the Israeli army pushed its troops to the Gaza borders. At first the observers thought this was a reaction to the threats of the Islamic Jihad; but in a preemptive action and before any attempts prompted by the Jihad forces, they assassinated Taysir Al-Jabri, one of their top commanders, an assault that showed the Islamic Jihad were unprepared for counterattacking such threats as they lost a further number of their prominent commanders. But the question remains why did Israel took preemptive action and did not wait for the Islamic Jihad to initiate? It appears that this attempt is part of the Tel Aviv strategy to meddle the equation formed since last year war and an emphasis that it will not allow the Gazans to expand the equation between this region and Israel to other Palestinian areas. i.e., if Israel is to embark on an operation in those areas Gaza will promptly counterattack.
Another point to consider is why did Hamas not intervene.

The reality is that if Hamas was to take part it would mean the beginning of a bloody war. This movement rules the Gaza strip and it has a commitment beyond an organization and it seems it has found the conditions inappropriate for this war considering the short gap with the last war and its widespread destructions that still remain.

It appears that Hamas has focused on improving the military strength and reinforcing their abilities that were inflicted last year as a result of limited abilities of the Gaza strip and their current situation and believes the expansion of Gaza’s reactions to other regions to Israel should depend on great events in these areas rather than arrests taking place in the west bank; in that case Gaza should be involved in a new conflict.

That is why Hamas will not intervene unless a particular event occurs and the recent tensions would be shortly over.
Israel also was not after a widespread conflict and only emphasized on encountering the Islamic Jihad; it only aims to change the equation without initiating a war and only inflicting serious damage.

But has Hamas abandoned the Islamic Jihad? The current situation of the conflict shows otherwise, firstly the leaders of the Islamic Jihad and Hamas have in the past three days stressed that they are fully working together in a coordinated form.

Secondly, based on the statements of the Zionists including Amit Segal, an intelligence analyst of channel 12 of the Israeli regime: “Let them keep silent or say what they like, I have no doubt that the Qassam Brigade of the Hamas Military wing are behind this recent wave of rockets.”