The second anniversary of the Abraham Agreement;

The Gains of the Arab Countries from The Agreement…Almost None! 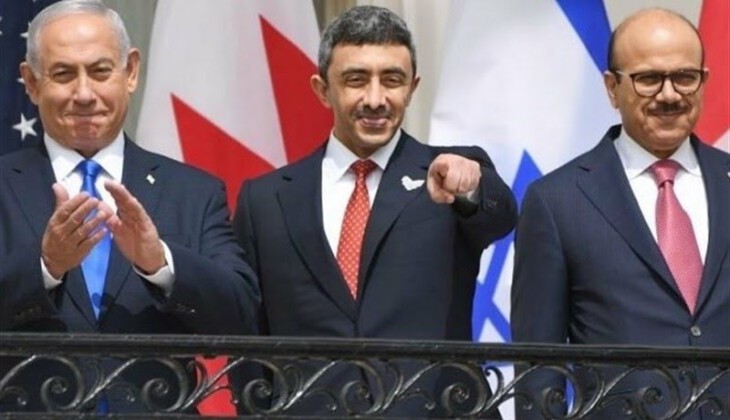 These days two years ago, after months of negotiations with American officials and the Israeli regime, Bahrain and the UAE finally signed the Abraham agreement inside the Whitehouse at the presence of Donald Trump, the then US president.

It was then when many Western media regarded this move as “A beginning of a new era” for the region.
There was such a propaganda over this news that many analysts concluded that many Islamic countries will come to terms with the Zionist regime and at least many of the Arab countries in the region will move towards normalization with the Zionists.

Trump’s son -in law who acted as a broker between the Arabs and the Zionists claimed to be the architect of the new middle east and said that if the next US administration whether the Democrats or Republics, are to work for the US national interests, they must implement this agreement in any way possible, develop it and admit that his prescription for west Asia is the ultimate copy for solving the problems in the region.

Around a month after signing the Abraham agreement, Sudan which was also after the economic interests of this agreement was pursuing the release of US sanctions against Khartoum and so signed the agreement. This was followed by Morocco which joined the Abraham agreement in order to have its dominance over the west Sahara recognized.

Each of these countries had received promises from the US and the Zionist officials that made them to conclude it would be better for them to be among the first regional players to normalize their relations with the Zionists and so moved ahead for exploring this regime.

Now after two years since the agreement it appears that the time is right to examine how far have these countries reached their objectives and how much has this agreement been able to make the life of the Muslims living in the occupied regime i.e., the west bank and Gaza easier.

Apart from agreement on intelligence collaboration and even on some military cooperation, the Zionist regime and the countries that signed the agreement agreed to work in the areas of energy, transportation, agriculture, tourism, security and technology achievements.

Due to the great Arbaeen march and the recent domestic events that has captured the entire media’s atmosphere, the anniversary of the Abraham agreement was rarely put to focus by the media, that is why, it appears that there is a long way to go for dealing with this event that took place two years ago for reviewing the loss and gain of the Arab countries of the region.

But it is highly significant when dealing with the gains of the Zionist regime in this agreement. Based on the media contents published, the Zionist regime has achieved many of its goals stated in the agreement but the Arab countries of the region have received no guarantee for the implementation of the promises made by the West, that is why, apart from a few examples of trade agreements and rise in the trade exchange between them and the Zionist regime, they have witnessed almost no other gains.

With regards to transportation, it seems the winner is the Zionist regime that has been able to open the doors of the countries in the region to its tourists.

It is also highly significant when dealing with the political, military and intelligence agreements between the countries in the region and the Zionist regime, since by initiating Iran phobia in the region, it appears the US and the Zionist regime are moving to influence the intelligence and security services of the neighboring countries or at least they are trying to initiate such cooperation with them.

However, lack of mutual trust has failed to undertake any important measures in this regard. Last year for the first time the military forces of the Zionist regime managed to join the fifth naval fleet of the US navy in Bahrain and other military forces of the Arab countries in the region in a military drill in the Persian Gulf and the Oman sea, one that was unique in the entire history of the region.

The Abraham agreement made Sudan a big failure. Sudan is one of the most interesting examples of such encounter between the US / the Zionist regime and the Arab countries that had agreed to normalize their relations.
The Sudanese officials who had sought to end the sanctions and create stability in their country have found no other way but to initiate relations with the Zionist regime as a way to move ahead with the Americans, but have fallen in the pit of political unrest and coup d’état in their country, and in practice they have gained no results from what they had expected from the agreement.

Last May, the Biden administration cut off all financial development aid to Sudan and even the food aid that was agreed in previous agreements. Sudan expected that the food aid in particular, wheat, would be directed by the US ships to this country but the Ukraine war and the scarcity of grains in the world and the economic crisis that has also gripped the US has made the US and the Zionist regime to fail to comply with their obligations towards Sudan!

The issue of the Palestinian human rights and their security since the Abraham agreement is of significance as well.

The Arab countries in the region in justifying their normalizations with the Zionist regime stated that they are looking forward to a better life standard for the Palestinians. They had imagined that the normalization of the Arabs with the Zionist regime would make this regime to eventually recognize the Palestinian rights or at least reduce its pressure and violence against them or to stop its invasive policies against them. But this was never maintained as the clashes and violence in the occupied regime and the west bank region continues. The clashes in East Jerusalem took place exactly at a time when the Arabs were engaged in negotiations with the Zionist regime over more economic and military cooperation and the settlement development were continued as a policy that has continued to this day despite all global oppositions.

The killing of the defense less Palestinians,their imprisonment and their human rights violations within the occupied lands have not only failed to decline but also they have worsened. Although, in its agreement with the UAE the Zionist regime had promised that it would stop developing its settlements, but it has continued to do so as there is no sign of ever wanting to stop this program any sooner.

The public surveys in the region show that people have a clear distrust towards the Zionist regime causing a large gap between the people and their governments. Based on the published survey the people of the UAE seriously distrust the Abraham agreement and only 1 out of 4 Emiratis believe that this agreement would bring a positive change to the region.