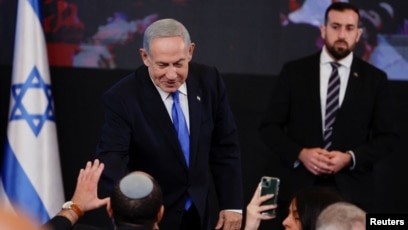 Benjamin Netanyahu (Bibi) has won again and he is to be the head of the cabinet for this regime. A coalition led by Benjamin Netanyahu; the former prime minister of the Zionist regime has won the maximum seats from the 120 seats in the parliament.

According to Negaheno report, one should know that although his return would mean a victory for himself and his party but it should be considered that Netanyhu’s return also means a disappointed Israeli society that have been compelled to vote for him.
If we look at the slogans of Netanyhu’s election campaigns we would realize that the Zionist community have lost their peace, security and confidence and wish to see its revival within Netanyhu’s violent behavior.
In his election campaign Netanyahu focused on cancellation of the maritime border deal with Lebanon and increase of violence against the Palestinians.

Once he takes over, he would take three major steps:

1- Return to reviving the power equation, annexing the west bank, exiling most of the Palestinians to Jordan as an alternative to their homeland.

2- Increase the assaults and attacks to the Al- Quds Mosque and restrengthen the Jewish control against it, wiping out the Arab-Islamic identity. Considering the leaders of the racist coalition. It is most likely that on their first attempt they would divide the Al- Quds Mosque like what they did to the Abrahamite Mosque in Al- Khalil and on the second step they would demolish it and erect a so-called temple over its ruins.

3- Cancel or suspend the maritime border deal with Lebanon, such that occurred over the Oslo agreement with the Palestinians. Netanyahu stated this in his election campaign with candidacy.

This is when gas and oil production is already taking placing in the Karish field.