Pope’s Mission in Bahrain Coinciding with the Country’s Elections; Legitimization the King 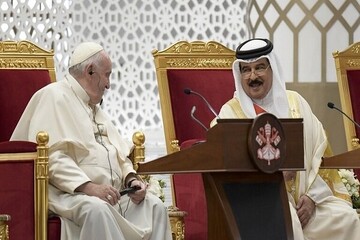 though there is a belief that the Pope and the leader of Vatican never thinks political but he takes presence in moments of political situations and global changes.

He visits Mosul in Iraq and meets the Christians who have no faith relations with Vatican and basically Pope Francis is not regarded as their leader.

During important global and regional events when Israel is involved, he never offers viewpoints. It is said that he has a formal role but for a special stream he plays a strategic role.

This is when Al- Khalifah is hosting “Bahrain Community for Dialogue; the West and the East for Human Cohabitation” participated by more that 200 of the religious leaders and Pope Francis the leader of the Catholic Christian is going to travel there in order to take part.

However, since it is even difficult for Pope Francis to amend what Hamad and the AL- Khalifeh have ruined, the holding of such a conference is hopeless.

In a statement entitled, “You Cannot Say Bahrain is Democratic; the Laws on Political Isolation in Bahrain”, the Human Rights Watch Organization has said that the government of Bahrain is using the law on political isolation and a few other methods for keeping the former opposition activists and political members out from state positions. In a documented report the organization has recorded cases for implementing laws of political isolation adopted in 2018 in Bahrain in order to prevent political opponents from candidacy for parliamentary seats or even serving in civil councils.

The executive director of the organization entitled, “Americans for Democracy and Human Rights in Bahrain” in a news article published in French Le Monde, have expressed their concern that the visit of Pope to this kingdom is to legitimize “the discriminatory” policy of the kingdom.