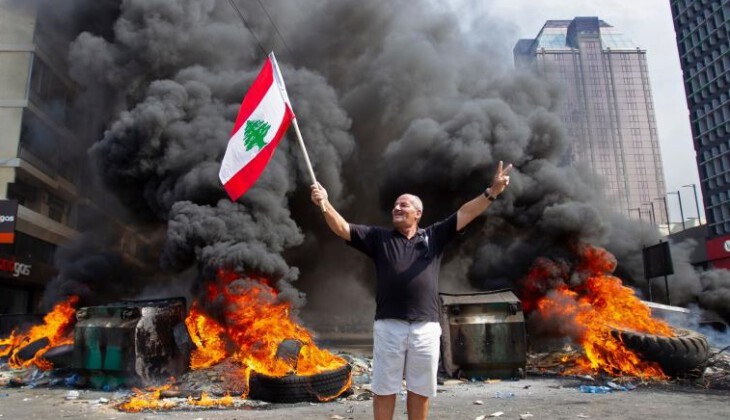 The changes in Iran in the past 2 months have many similarities with the crises in Iraq and Syria that will be dealt with in a 4 -part report.

According to Negaheno report the protests in Iraq were initially based on economic demands. But gradually and within the early days they changed into violent protests against religious symbols.

This continued to as far as protests that were called the October protests or Tishrin, referring to the Iraqi jokers based on the American movie “Joker” that impacted the political process, creating anti-governmental protests and changes in the religious tastes, targeting social and religious interests.

More than 3 thousand NGOs that were set up by the American embassy took part in this period.

In Iraq a Turkish restaurant turns into a place for coding and protests with one of its floors allocated for holding Mossad, CIA and MIT forces.

The think tank for the October protest operation was in this very Turkish restaurant.

The circumstances in Iran in the past 2 months have many similarities with the crises in Iraq and Syria which will be dealt with in 4 parts.

According to Negaheno report, the economic demands of Iraqi people is diverted towards encountering religious principles and the resistance group in Iraq. The actual demands are forgotten.

The jokers in Iraq are trained in Erbil, Kurdistan and some neighboring countries including in UAE, in Europe and even in the framework of travel entertainment in USA.

America uses these jokers or Tishrini’s as a leverage for pressure against the government of Iraq and political vacuum. The Saudi and UAE dollars are divided between the jokers.

In the crime in Wasbah area in Baghdad a young man was stabbed to death in a violent manner.

In the same Baghdad square, he was hanged from the traffic light. The Saudi and UAE networks took the main lead of the changes by Al-Hadas and Al -Arabieh.

The changes in Iran in the past 2 months have many similarities with the crises in Iraq and Syria that will be dealt with in a 4 -part report.

According to Negaheno report the onset of the crisis in Syria began with the killing of a Syrian girl in Dara city. The fake killing continued. Of course, the Syrian army was lacking the skill to deal with the rioters with the common unmilitary methods.

The economic demands and protests and insecurities in the country led to the emergence of ISIS and presence of over 250 terrorist groups in Syria.

Mohammad Bin Salman declared that they will bring the war into Iran so that Iran’s abilities surrounding the region will be involved within the country and for internal conflicts based on the conflicts that occurred in Iraq and Syria.

Not so long after, the peaceful slogans turned into setting the Shiite mosques and holy places on fire.

The Saudi dollars arrived in Syria on trucks. ISIS was provided with the most powerful media. Al-Jazeera like the Saudi International network had turned into speakers for the ISIS in the regions occupied by them.

The instances mentioned in these four parts show that efforts were made to simulate the Iraq and Syria models for the changes in Iran .