Will France Have to Grapple with a Tough January? 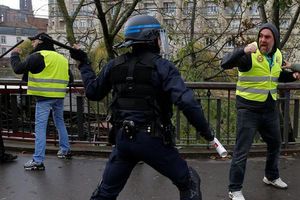 The upcoming crises for the government of France in January; retirement, energy crisis, inflation, it’s time for a collective movement!

According to Negaheno report, will France have to grapple with a tough January? The rising inflation, decrease in the electric resources by the RTE, the ninth wave of Corona virus and the changes in the retirement laws which are faced by widespread social opposition.

The coincidence of these events with the month of January depicts the possibility of a wave of dissatisfaction and riots in France that has raised fear in the government.
Bruno le Maire, minister of economy has declared that the peak of inflation has not passed yet and is to continue for the next couple of months.

The price of gas has increased by 15% while there is no news of a rise in the wages. This has gravely concerned the government. It appears that these days the main concern for the government is to control the energy prices but due to decline in the energy resources it is less likely to overcome the problem as it would be facing great protests within the upcoming weeks.

Gabriel Attal announced, “We are prepared for any scenario”.
Emmanuel Macron who seemed very frustrated in an interview said: “the duty of the government is to provide energy; we should not fear the people with pointless scenarios. I am not scared of anything.”

During this period, we are witnessing the ninth wave of Corona virus which is the result of government’s mismanagement in controlling the pandemic, causing new concerns regarding the rate of contraction and the possible return to the restrictions.

On the other hand, French prime minister, Elisabeth Borne has decided to submit a bill to the parliament on changing the laws of retirement next week. In this law the age of retirement is suggested to reach from 62 to 65 years of age. Nevertheless, one of government motivations for this attempt is to improve and promote the working conditions for the older employees.

75% of the people do not believe in this and 70% of the French people are quite against the rise in the retirement age. It appears whatever the government’s decision, it will encounter the fierce opposition of the labor syndicate.

These days the general strike has expanded across the entire country and the workers and employees demand a rise in their wages. In Sanofi company the staff of 16 sites have gone on strike since 14th November and demand a 500 Euros salary rise. In RTP the (Paris private transportation company) the staff have gone on strike for more than a month demanding a 300 Euro salary increase.

In RTE (the electricity transmission network), unions such as GRDF (France Gas network company) request for a 7% increase in the salary. These strikes happen when they are completely boycotted by the media and there is no news about them.