These three people and the 2030 political scenario in Iraq 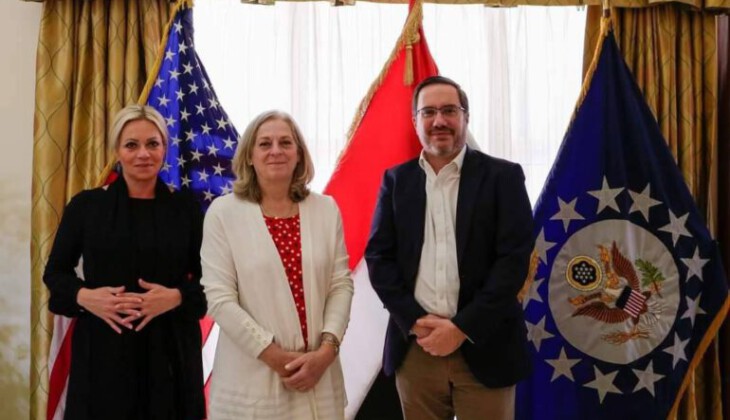 The new US ambassador to Iraq will be holding a meeting in Baghdad with Jenin Blaschart, the UN envoy and the British ambassador.

According to Negah No, almost all US and Western interventions are planned and carried out under the cover of the United Nations and in the humanitarian aid and NGOs.

It is true that the United States withdrew from Iraq militarily, but with its largest embassy in Baghdad, it is still thinking of occupying the geographical, cultural and social aspect and changing the tastes of the Iraqi people and paving the way for the separation of religion and orientation to Western culture.

Therefore it is not of a surprise that the new US ambassador to Iraq holds a meeting with Jenin Blaschart, the UN envoy and the British ambassador.

New US Ambassador Elena Romanowski, UN Secretary-General Representative Jenin Plaskhart and British Ambassador to Baghdad Mark Bryson Richardson shall discuss matters on Iraq and related issues such as governance, economic support, anti-corruption efforts, independence of energy and climate affairs. They shall exchange thoughts on human rights and the provision of humanitarian assistance to respectable people.

Just take a look at the highlights if this meeting, it may interest you to know that most of the issues that were targeted yo be resolved int this meeting are the self-made crises that the United States has created for Iraq or has been the main manager.

It’s interesting to see the US and British ambassadors are talking about Iraqi sovereignty. Then they talk about human rights, while playing a key role in creating a crisis and military occupation of Iraq, as well as supporting ISIS.

The meeting of the three in Iraq, simultaneously joining of 35 new BBC staff in Iraq, indicates that a new conspiracy is being formed in Iraq, which is likely to create social pressure and street protestsin the coming months, and as a result, can be exploited to create a political vacuum and to continue the state vacuum, and ultimately weaken the Iraqi resistance.

In general, the main goal and motive in Iraq and Lebanon is same, which is to continue the process of statelessness or to bring in the those who are more aligned with US policies.

One can still remember the experience of the simultaneous street protests in Iraq and Lebanon, how the flow of protests, which was due to the economic demands of the people of the two countries, was directed towards the resistance and the national and resilient forces of the country and then towards Tehran.

Therefore, the need for vigilance of the leaders of the Iraqi resistance and the Iraqi people in the coming months is felt more than ever so that the scenario of street protests is not repeated.